We are delighted to share the news that a brand new immersive production of Disney’s NEWSIES – performed ‘in the round’ – will have its UK premiere at London’s Troubadour Wembley Park Theatre, from 28 November 2022.

Based on a true story, NEWSIES is set in New York City at the turn of the 19th century. It’s the rousing tale of a ragged band of teenage newspaper sellers, who dream of a better life far from the hardship of the streets. After newspaper magnate Joseph Pulitzer hikes up the prices for his papers charged to the newsies, Jack Kelly rallies his fellow newsboys in an attempt to protest the change, falling in love with young reporter Katherine along the way. These young newsies from across the city come together and rise up against the exploitation of wealthy publishing tycoons and fight for justice using the only power they have – solidarity.

Disney’s NEWSIES is an award-winning Broadway musical with music by Alan Menken, lyrics by Jack Feldman and book by Harvey Fierstein.

Now for the very first time, audiences in the UK have a chance to enjoy the thrill of one of the biggest Broadway hits of recent years. In an innovative and brand new immersive production ‘in the round’ at Troubadour Wembley Park Theatre, theatregoers will be thrust right inside the action as the newsies dance, sing, jump and fly around the streets of a booming 19th century New York City.

Stage Chat – a round up of reviews

Whats On Stage – ***** Five stars “Bombastic and balletic, this Broadway hit is a musical must-see”

The Guardian –  “This show about young New York paper-sellers has stirring anthems and screwball energy.”

All That Dazzles – “Newsies really is the very best of the best. Absolute perfection in every sense, Newsies may well be THE show of the year!”

Inspired by the hit television series Peaky Blinders created by Steven Knight, tickets have gone on sale for the London Premiere of Rambert Dance in Peaky Blinders: The Redemption of Thomas Shelby. This first of its kind production will take place at Troubadour Wembley Park Theatre between 12 October – 6 November 2022 before the show embarks on a UK tour.

Written and adapted for the stage by Peaky Blinders’ creator Steven Knight, Peaky Blinders: The Redemption of Thomas Shelby is a dance theatre show directed and choreographed by Rambert’s Artistic Director Benoit Swan Pouffer. The production will feature the 20 permanent Rambert dance company on stage, and a live band playing specially commissioned music.

Peaky Blinders: The Redemption of Thomas Shelby is Rambert’s first collaboration of this kind and through dance theatre picks up the story of the Peaky Blinders at the end of World War One, following Tommy Shelby and Grace Burgess through their passionate love affair. While Tommy is building his empire, Grace is operating as an undercover agent for Special Branch on a mission to get close to the heart of Tommy’s gang. As the story unfolds, many hearts are broken.

“Peaky Blinders has always had music and movement at its heart and now the beating heart of the show will be transferred to the stage, an interpretation of Tommy’s story performed by Rambert, one of the leading dance companies in the world. This is dance for people who don’t usually watch dance and what I’ve written has been transformed into something startling by consummate dancers and choreographers. If the concept of a Peaky Blinders dance seems strange, reserve judgement and reserve a ticket.”

“Peaky Blinders: The Redemption of Thomas Shelby is something on a scale we’ve never done before, and I couldn’t be more ready for the challenge – it’s such an exciting opportunity as a choreographer to tell these stories and recreate these characters through dance. It is also a great collaborative opportunity to have been working closely with Steven Knight on this original production. What you’re going to get as a result will be an inspiring and uplifting dance show, but so much more than a dance show. There is of course a strong narrative, that of Tommy and the Peaky Blinders so it is dance, and it is also theatre. And with such iconic music from a live-onstage band, it is more again. I can’t wait to bring these hugely popular characters to the stage here in Birmingham, then on tour to audiences around the country”

“Rambert has always been committed to making dance that resonates with audiences across the country and we’re incredibly honoured to be trusted by Steven Knight with his nationally beloved Peaky Blinders. It’s so fitting that we start the journey in Birmingham, where Rambert has been touring to since the 1930s. We look forward to welcoming a new generation of audiences to theatres with a story that speaks to so many people.”

“We are delighted to be partnering with Rambert on the creation and world premiere of Peaky Blinders: The Redemption of Thomas Shelby. The opportunity to collaborate on a production that is so synonymous with our city is incredibly exciting and we cannot wait for audiences to experience the thrill of seeing the well-known characters from the show come to life on our stage in this sensational adaptation by Steven Knight.”

Tweet
The National Theatre’s Olivier and Tony Award-winning production of The Curious Incident of the Dog in the Night-Time returns with a new 10th Anniversary UK and Ireland tour, beginning at Troubadour Wembley Park Theatre this November.
We are delighted that Wembley Park Theatre will pay 50p of the selling price of every ticket to Troubadour Subsidiary Trading which donates its taxable profits to Troubadour Trust (Registered Charity No. 1187251) – inspiring arts and skills in the community around our venues.

Fifteen-year-old Christopher has an extraordinary brain. He is exceptional at maths, while everyday life presents some barriers. He has never ventured alone beyond the end of his road, he detests being touched and he distrusts strangers. When he falls under suspicion for killing his neighbour’s dog, it takes him on a journey that upturns his world.
Performance Schedule*
20 November 2021 – 9 January 2022
Tue & Thu: 2.00pm
Wed & Thu: 7.00pm
Fri & Sat: 7.30pm
Sat & Sun: 2.30pm
*Subject to change
FOR SCHOOLS TICKETS
Education Group Rate
B and A-C seats reduced to £22.50
One free teacher ticket with every 10 students paid
Valid Tuesday – Thursday performances (exclusions apply)
Schools rates are subject to availability.
To book schools’ tickets, please email groups@kxtickets.com
ACCESS RATES & PERFORMANCES
Access rate: 2/3 of full-price ticket. If 2 tickets are purchased at the access rate (i.e. to accommodate a carer/companion/PA also), the rate is 1/3 of full-price for each ticket, which works out the same as a free companion ticket.
To book access tickets, please email access@kxtickets.com
Access Performances:There will be an Audio Described and Captioned Performance, dates and times to be confirmed.
Running Time: 2 h 30 mins including an interval
Age Guidance: Recommended for 11+. There is some strong language in this production, as there is in the novel. This occurs at the very beginning of the show and infrequently at other points during the show. We can provide a copy of the full script should you wish to have more information. Please note: This production contains strobe lighting, smoke effects, high intensity video & light effects, and loud sound effects.
Tickets here:
https://www.troubadourtheatres.com/…/the…/book-tickets
Performances take place at:
Troubadour Wembley Park Theatre
3 Fulton Road, Wembley HA9 0SP
www.troubadourtheatres.com/wembley-park
We look forward to welcoming you back!
Tweet

Since July 2019 we have developed and delivered free bespoke workshops for a variety of organisations including Home-Start and Ark Academy.

Our workshops can explore any theme with a variety of different art forms.

If you have an idea, or a group to provide for, please get in touch.

Working with the National Theatre on their acclaimed production of War Horse helped us engage with over 2,000 pupils, parents and community groups in Brent. The War Horse programme included a CPD training session for teachers with the NT and Imperial War Museum, a Community Day at the theatre,  a devised piece ‘No Man’s Land’ with Brent Youth Theatre, free Page-to-Stage workshops and our incredible two schools-only performances for state school children in the borough supported by the Trust, the NT and John Lyon’s Charity. The feedback has been overwhelmingly positive, with the schools’ performances getting mentions in local press, and even in OFSTED reports. 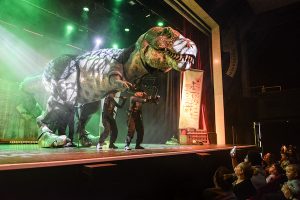 Troubadour Wembley Park Theatre opened in July 2019 with Dinosaur World Live. The auditorium and foyer resembled Jurassic Park as huge dinosaur puppets roamed at their leisure in the foyer and auditorium. To give the audience a chance to feel part of their world, we offered free dinosaur mask making workshops in partnership with Abundance Arts leading to the “discovery” of 900 previously unseen species. The David Shepherd Wildlife Foundation also set up camp to discuss themes of extinction and to offer the opportunity for audience members to participate in the Pangolin Art Challenge.

Outside Edge celebrated their twentieth year anniversary on the 1st November 2019 with a birthday party at White City Theatre showcasing 20 inspiring years of groundbreaking theatre and a recovery community galvanised through drama.

On the 30th November 2019 we opened the doors of every space at Troubadour White City Theatre to West London Drama Training for a day of free musical theatre workshops for local schools and drama groups.

Using the musical Oliver! as our inspiration, 150 children aged 7-18 participated in singing, acting and dancing workshops across both auditoriums, the foyer, and even the restaurant in preparation for a showcase for family and friends on the main stage at White City Theatre.

We are taking a break to catch our breath, but we will be back in 2023.

If you can, please donate now so that we can come back stronger.