When The Wedding Singer came to Wembley Park Theatre it put us in the mood to make some music.

So, during February half-term we offered free songwriting workshops. These were suitable for the whole family and hosted by our in-house band. Before the matinees on 15th, 23rd and 24th February the foyer became a hub of creativity with participants choosing chord progressions, suggesting themes and telling the most diastrous wedding stories that they could remember or fabricate. The songs were then performed to the audience of the shows as they arrived, to put them in the mood for the musical stylings of Kevin Hart and Simply Wed.

You can listen to the songs here 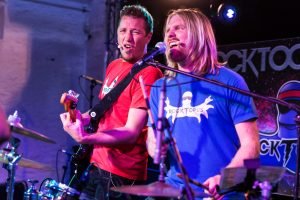 We are taking a break to catch our breath, but we will be back in 2021.

If you can, please donate so that we can come back stronger.